The very word ‘Cancer’ is dreaded.A cancer diagnosis makes most of the people feel that life has gone out of control.Surely, it is normal to be afraid of the unknown. Uncertainty can make you feel afraid at first. Anxiety and angriness follows. Some people become irritated and frustrated with themselves.Once people start understanding cancer clearly and in depth,they can take charge.They start accepting that they have cancer and they often feel a sense of hope. Surely,there are many reasons to feel hopeful. Millions of cancer patients have survived. Living with cancer and beyond it have become possible more than before. So, let’s dive into cancer basics. 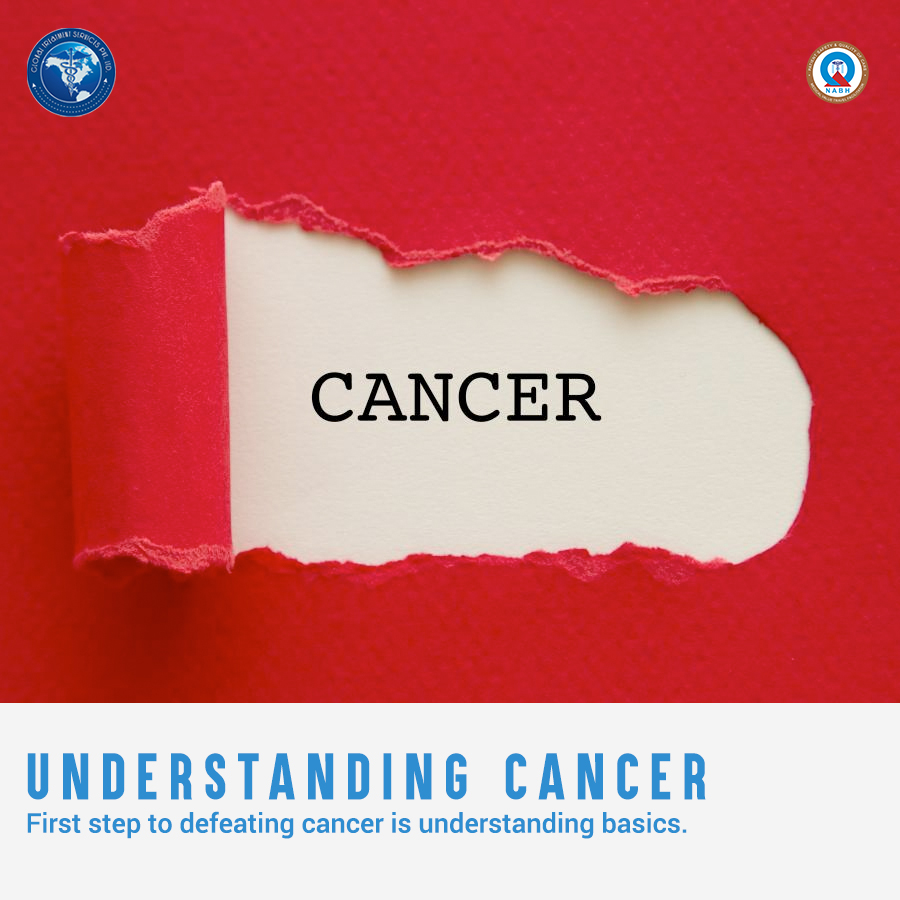 Cancer is caused by uncontrolled division of abnormal cells.Usually,we have right number of cells in our body.This is maintained by the cells through control signals produced in them.Cells may start to grow or multiply if these signals go faulty.The cells multiply rigorously to form a tumor where the cancer starts.
The instructions are generated by thousands of genes inside the cell nuclei.Normally genes make sure that cells grow and reproduce in an orderly and controlled way. Sometimes a change happens in the genes when a cell divides. This is a mutation.Mutation means that abnormal proteins may be produced in the cells that work differently to normal triggering cells to divide more and more. And once cells start growing too fast, they are more likely to pick up further mutations and less likely to be able to repair the damaged genes.

A tumour may contain millions of cancer cells.Cancer cells can break through basement membrane,the membrane which keeps the cells of every body tissues inside.Once this happens, the cancer is called invasive. As a tumour gets bigger, it takes up more space in the body. The cancer can then cause pressure on surrounding structures. It can also grow into body structures nearby. This is called local invasion. A cancer may grow out in a random direction from the place where it started. Cancer cells can move about more easily than normal cells. So it seems likely that one of the ways that cancers spread through nearby tissues is by the cells directly moving.

Tumours  can be benign or cancerous (malignant).

Benign tumours are made up of cells that are quite similar to normal cells.They usually grow quite slowly and do not spread to other parts of the body.They will  cause a problem only in some cases such as when theygrow very large and press on other body organs,become painful or release hormones that affect how the body works and take up space inside the skull (such as a brain tumour)

They are made up of cancer cells. They:

The place where a cancer starts in the body is called the primary cancer or primary site. Cells from the primary site may break away and spread to other parts of the body. These escaped cells can then grow and form other tumours, which are known as secondary cancers or metastases.
Cancer cells can spread to other parts of the body through the bloodstream or lymphatic system. There they can start to grow into new tumours. Cancers are named according to where they first started developing. For example, if you have bowel cancer that has spread to the liver, it’s called bowel cancer with liver metastases or secondaries. It is not called liver cancer. This is because the cancerous cells in the liver are actually bowel cells. They are not liver cells that have become cancerous.

Cancers are divided into groups according to the type of cell they start from. They include

Staging is a way of describing the size of a cancer and how far it has grown. When doctors first diagnose a cancer, they carry out tests to check how big the cancer is and whether it has spread into surrounding tissues.Cancer staging may sometimes include the grading of the cancer. Tumour grade describes a tumour in terms of how abnormal the tumour cells are when compared to normal cells.

Generally the grading is as follows.