Crohn’s disease is a chronic inflammatory condition of the gastrointestinal tract and belongs to the group of  Inflammatory Bowel Diseases (IBD). It is named after Dr. Burrill B. Crohn, who first described the disease in 1932.While it primarily causes ulcerations in the small and large intestines, it can affect any part of the digestive system, from the mouth to the anus.What differentiate it from ulcerative colitis is that Crohn’s disease can affect any part of the digestive tract.Ulcerative colitis is limited to the colon, also called the large intestine. 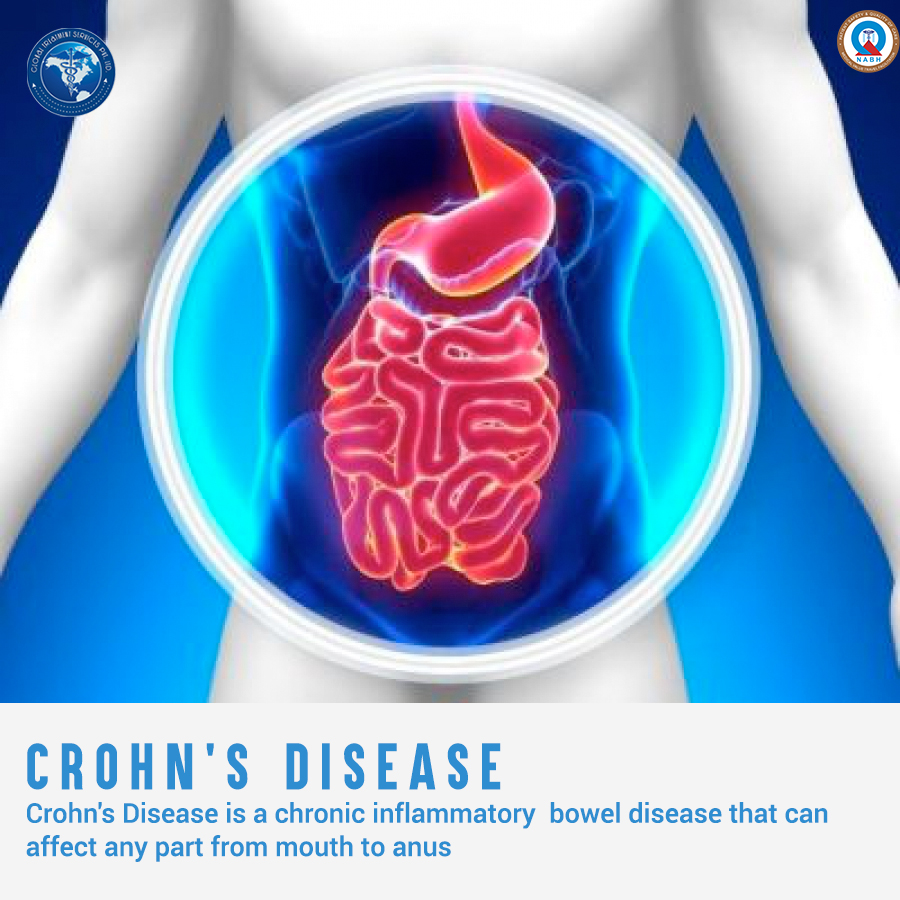 When the immune system activates its immune cells and proteins to do battle, it causes inflammation at the site. In Crohn’s disease there is a loss of regulation of the immune system within the intestinal tract and it cycles between periods of great activity, ulceration, and periods of relative calm or remission.About 20% of people with Crohn’s have a blood relative who has IBD.It affects men and women equally.It can occur any time but mostly start in the ages 15-35.

There are five  types of Crohn’s disease based on which part of the gastrointestinal tract it affects.The associated sypmtoms and complication differ for each types. It is  important to analyse the type and symptoms together to get an understanding of the type of Crohn’s disease.

Ileocolitis
This is the most common form of Crohn’s. ileocolitis affects the ileum(the end of the small intestine)  and the colon (large intestine). Symptoms: Diarrhea , cramping  in the right lower part or middle of the abdomen, weight loss.

Ileitis
This type affects only the ileum. Symptoms :same as ileocolitis. but in severe cases, complications may also include fistulas in right lower quadrant of abdomen.

Gastroduodenal Crohn’s disease
This type affects the stomach and the duodenum(the beginning of the small intestine). Symptoms: loss of appetite, weight loss, nausea and vomiting.

Jejunoileitis
This type is characterized by patchy areas of inflammation in the jejunum(the upper half of the small intestine ). Symptoms: mild to intense abdominal pain and cramps following meals, diarrhea. In severe cases, fistulas may be formed.

Crohn’s (granulomatous) colitis
This type affects the colon only. Symptoms: diarrhea, rectal bleeding, and disease around the anus like abscess, fistulas and  ulcers, skin lesions and joint pains.

Also Crohn’s disease can be classified on the basis of the nature of disease as follows.

In general, there are two reasons to undergo Crohn’s tests and procedures:

Imaging Tests
These are tests that take pictures of different parts of your body to provide a clearer picture of your condition. They show your doctor areas of disease activity and identify possible complications. These are only some of the imaging tests used for Crohn’s—there are others your doctor may recommend.

Crohn’s is a chronic, life-long disease that requires constant treatment. Even though there is no cure for Crohn’s, there are many different medications available to treat it.The following are the categories of drugs prescribed to treat Crohn’s:

Regarding pregnancy,most women who have Crohn’s disease can have a normal pregnancy and healthy baby.However, some Crohn’s disease medicines can harm an unborn baby, so you should speak to your doctor if you are planning pregnancy.Women may also find it harder to get pregnant during a flare-up.Possible complications of the disease are

So adequate screening and diagnosis is required for handling the disease and to prevent severe complications.