Everyone of us have had periods of feeling unmotivated and low moods.But in major depressive disorder,these feelings are intense and prolonged.The persistent feeling of sadness ill affects and impair how you feel, think, and handle daily activities.It troubles normal day to day routines such as sleeping,eating,working etc.You may lose interest even in your favourite activities or hobbies.This eventually culminates in serious physical and emotional complications.The person feels unworthy and becomes suicidal 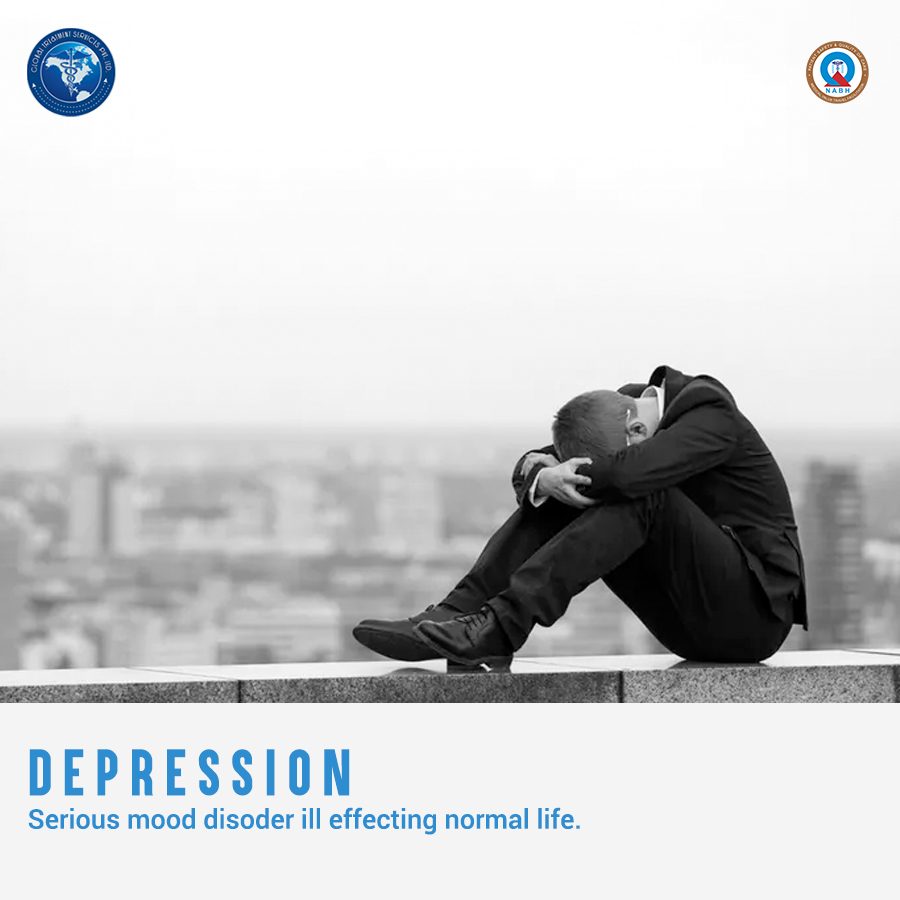 Depression is a serious mood disorder and is common.According to WHO,there are 3oo million people affected worldwide.Although it can affect anyone and all ages,more women are affected than men.A person is said to suffer from depression,if he or she experiences the  symptoms for at least two weeks.Depression do not go away on its own.But the good news is that it is treatable.

There are multiple types of depression but many of them have similar symptoms.Also,not everyone experiencing depression have all symptoms.

Thoughts and Behaviour : Persistent sad, anxious, or “empty” mood,not getting things done at work,withdrawing from close family and friends,unable to concentrate or remember,difficulty making decisions,Thoughts of death or suicide, or suicide attempts
Feelings : Feeling restless or having trouble sitting still,feeling worthless,pessimistic,guilty,irritable,miserable,Loss of interest or pleasure in hobbies and activities
Physical : Decreased energy or fatigue,moving or talking more slowly,difficulty sleeping, early-morning awakening, or oversleeping,appetite and/or weight changes,aches or pains, headaches, cramps, or digestive problems without a clear physical cause and/or that do not ease even with treatment

Life events
Research suggests that continuing difficulties or recent events  or a combination of events can ‘trigger’ depression if you’re already at risk because of previous bad experiences or personal factors.
Personal factors

Changes in the brain
Depression is not simply the result of a ‘chemical imbalance’, for example because you have too much or not enough of a particular brain chemical. There’s a greater risk for depression if the frontal lobe of your brain is less active. However, scientists don’t know if this happens before or after the onset of depressive symptoms.

Examples of other types of depressive disorders newly added to the diagnostic classification of DSM-5 include disruptive mood dysregulation disorder (diagnosed in children and adolescents) and premenstrual dysphoric disorder (PMDD).

Different types of anxiety or depression require different types of treatment. This may include lifestyle changes such as regular physical activity, healthy eating and adequate sleep, family and peer support, and psychological therapy for mild-moderate anxiety and depression, through to more specialized psychological and medical treatments for severe depression and/or anxiety provided by a team of health and mental health professionals.
Most modern antidepressants have an effect on your brain’s chemical transmitters (serotonin and noradrenaline), which relay messages between brain cells – this is thought to be how medications work for more severe depression. Psychological treatment can also help you to regulate your moods.

Brain Stimulation Therapies
If medications do not reduce the symptoms of depression, electroconvulsive therapy (ECT) may be an option.Based on the latest research ,ECT can provide relief for people with severe depression who have not been able to feel better with other treatments.

Effective treatment can stimulate the growth of new nerve cells in circuits that regulate your mood, which is thought to play a critical part in recovering from the most severe episodes of depression.There is no one proven way that people recover from anxiety or depression, and it’s different for everybody. The important thing is finding the right treatments and the right health professionals and support team that works for you.