Vitiligo is a dermatological condition which causes the skin to lose its natural colour and  as a result, uneven white patches appear on the body. It is not medically dangerous  or life threatening.Also it is not contagious and affects about 1% of people in the world.Apart from skin,vitiligo may cause depigmentation in the hair on the scalp, mouth,eyelashes or eyebrows.It is not a form of skin cancer and  in fact, most of the people with vitiligo are every bit as healthy as a normal person. 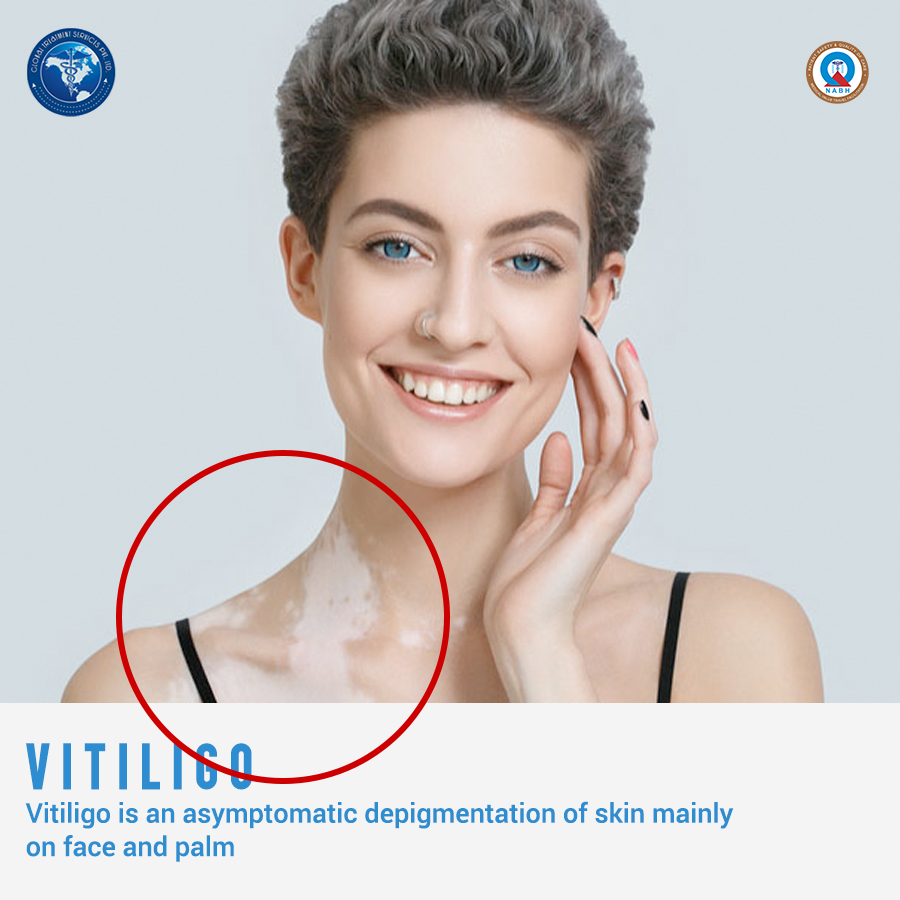 Vitiligo is due to the melanocytes of skin being destroyed. Melanocytes are the cells within skin that produce melanin,which gives the pigment to the skin.Melanin also protect the skin from sun’s UV rays.The destruction of melanocytes is thought to due to an autoimmune problem where the immune system attacks healthy  tissues.
People with an autoimmune disease, such as Hashimoto’s disease,Addison disease,pernicious anemia,diabetes or alopecia areata, are at an increased risk of developing vitiligo. Vitiligo is also seen to run in families.
Although vilitigo affects any race equally,but it tends to be more more noticeable in darker skinned people due to the contrast.

There are three types of vitiligo, depending on the extent and location on the body:

Vitiligo can happen anywhere on the body, but it’s more likely to develop in some areas:

Symptoms usually appear as depigmented areas where lot of sun exposure is received such as face ,arms and hands but may also appear in the groin area, in the armpits, and around the belly button.

Some signs of vitiligo include

Vitiligo may also lead to inflammation in the iris or hearing loss.

Mostly,dermatologists identify the condition visually.Some dermatologists request for further testing like a skin biopsy,which will show whether melanocytes are present in the skin. He may also test for a blood test to see if you have another autoimmune disease.

Vitiligo is more than a cosmetic condition and needs attention. Vitiligo can greatly impact the self esteem of affected person.Combined medical and mental health treatment can elevate the quality of affected individual.