Most people confirmed to have MERS-CoV infection have had severe respiratory illness with symptoms of:

Pre-existing conditions among people who got MERS have included

The symptoms of MERS start to appear about 5 or 6 days after a person is exposed, but can range from 2 to 14 days.

MERS-CoV, like other coronaviruses, likely spreads from an infected person’s respiratory secretions, such as through coughing. However, we don’t fully understand the precise ways that it spreads.

MERS-CoV has spread from ill people to others through close contact, such as caring for or living with an infected person. Infected people have spread MERS-CoV to others in healthcare settings, such as hospitals. Researchers studying MERS have not seen any ongoing spreading of MERS-CoV in the community.

Diagnosis:
Real-time reverse transcriptase-polymerase chain reaction (RT-PCR) testing of upper and lower respiratory secretions and serum
MERS should be suspected in patients who have an unexplained acute febrile lower respiratory infection and who have had either of the following within 14 days of symptom onset:

Testing should include real-time RT-PCR testing of upper and lower respiratory secretions, ideally taken from different sites and at different times. Serum should be obtained from patients and from all, even asymptomatic close contacts, including health care workers (to help identify mild or asymptomatic MERS). Serum is obtained immediately after MERS is suspected or after contacts are exposed (acute serum) and 3 to 4 weeks later (convalescent serum). Testing is done at state health departments.

Treatment:
Treatment of MERS is supportive. To help prevent spread from suspected cases, health care practitioners should use standard, contact, and airborne precautions.

There is no vaccine.

Prevention:
There is currently no vaccine to protect people against MERS. But scientists are working to develop one.

We can help reduce the risk of getting respiratory illnesses:

People Who May Be at Increased Risk for MERS:

If you develop a fever and symptoms of respiratory illness, such as cough or shortness of breath, within 14 days after traveling from countries in or near the Arabian Peninsula, you should call ahead to a healthcare provider and mention your recent travel.

If you have had close contact with someone within 14 days after they traveled from a country in or near the Arabian Peninsula, and the traveler has/had fever and symptoms of respiratory illness, such as cough or shortness of breath, you should monitor your health for 14 days, starting from the day you were last exposed to the ill person.

Healthcare personnel who had close contact*** with a confirmed case of MERS while the case was ill, if not using recommended infection control precautions (e.g., appropriate use of personal protective equipment), are at increased risk of developing MERS-CoV infection. These individuals should be evaluated and monitored by a healthcare professional with a higher index of suspicion.

f you have had close contact with someone who has a confirmed MERS-CoV infection, you should contact a healthcare provider for an evaluation. Your healthcare provider may request laboratory testing and outline additional recommendations, depending on the findings of your evaluation and whether you have symptoms. 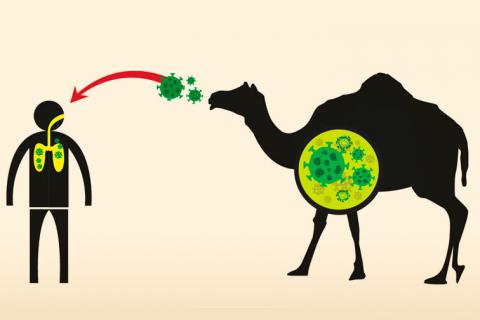 Direct contact with camels is a risk factor for human infection with MERS-CoV.

We’re sure, you now have a fair idea of what MERS-CoV is all about and the way it could impact your life. Please seek immediate medical attention at the nearest healthcare centre if you find the MERS-CoV. symptoms, don’t ignore the symptoms as there is no medicine available at present.