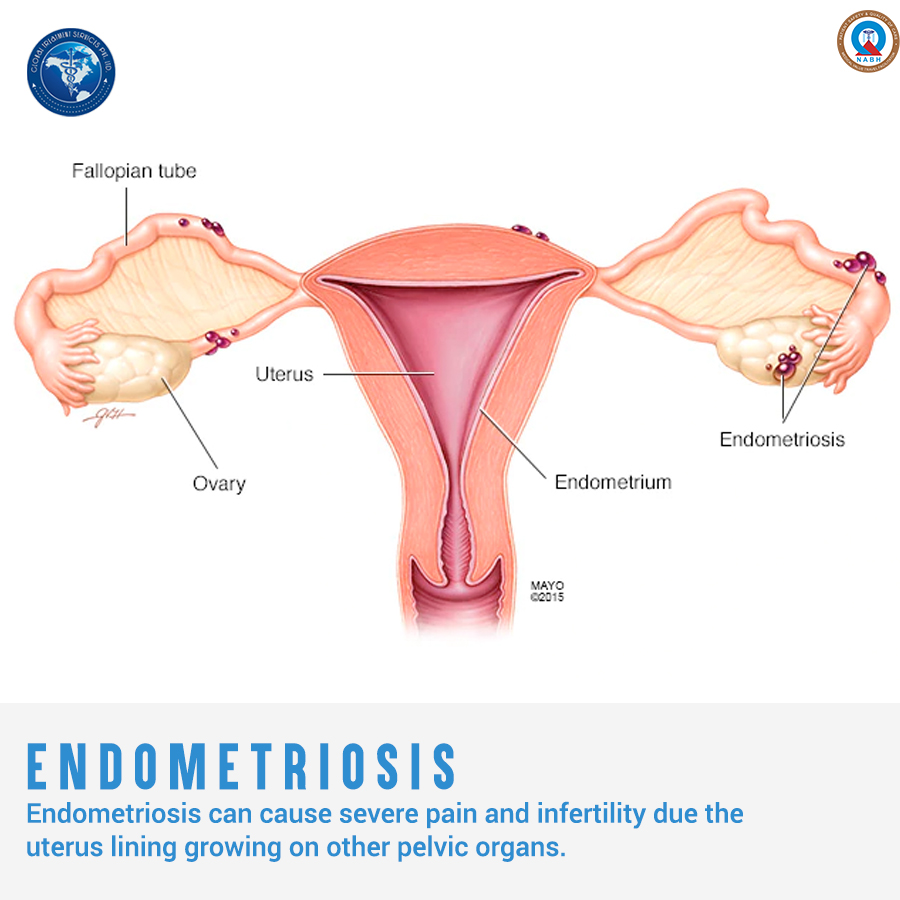 In a regular menstrual cycle,if fertilization has not happened , hormonal changes signal the uterus to prepare to shed its lining.The endometrial tissues build up and egg along with the uterine lining is shed in form menstrual bleeding.Whereas in patients with endometriosis,the misplaced endometrial tissues  also respond to the hormonal signals and by building up and breaking down just like the endometrium does, resulting in small bleeding inside of the pelvis.Unlike the cells in the uterus that leave the body , this blood has no way to escape.This leads to inflammation, swelling and scarring of the normal tissue surrounding the endometriosis implants.
Mostly,the endometrial tissues grow on ovaries, Fallopian tubes, bowel and outer walls of the uterus.But it can appear anywhere in the body.Though very rarely,it is found to develop on kidney, bladder and lungs. Endometriosis can be located on and even within an ovary, causing fibrous cysts called endometriomas. Blood become embedded in the normal ovarian tissue  surrounded by endometrioma.

Several ideas have been proposed to explain what causes the tissues on uterine lining to grow on other parts of the body.One idea explains endometriosis by retrograde menstruation.It is a sort of reverse menstruation in which the period blood and tissues travel out of the uterus  through Fallopian tubes to the abdominal cavity where it attaches and grows.But this idea fail to explain the occurrence of endometriosis at strange locations like thumb and knee.It is better explained by another theory that suggests that some cells outside uterus can transform into endometrial cells.  Another possible explanation is that the cells from the lining of the uterus travel  and implant via blood vessels or lymphatic system to reach other organs similar to how cancer cells spread. Also, endometriosis can spread as a result of direct transplantation during a cesarean section where in endometriosis cells attach to the abdominal incision and endometriosis is formed in the scar.

Symptoms of endometriosis vary in different women. Some women experience mild symptoms, but others can have moderate to severe symptoms. The severity of your pain is not the indicator of stage of the condition. Mild form of the disease may cause agonizing pain. It’s also possible to have a severe form but very little discomfort.For some,it is asymptomatic.

Pelvic pain is the most common symptom of endometriosis. You may also have the following symptoms:

Due to the misplaced cells,the woman with endometriosis have bleeding from tissues outside the uterus as well during menstrual period.When blood comes into contact with other organs especially in the abdomen, it causes inflammation and irritation, creating pain. Also,the scar tissue developed from the endometriosis contribute to the pain.
Endometriosis seems to impair fertility  by causing distortion of the fallopian tubes making it incapable of picking up the egg after ovulation and by creating inflammation that can adversely affect the function of the ovary, egg, fallopian tubes or uterus.
Statistics show that  20 – 40% of women with infertility have endometriosis and this points to how much of a factor endometriosis is in infertility!

Since endometriosis manifests itself in many ways and shares symptoms with other conditions, diagnosis can be difficult and often delayed. The condition is in most case diagnosed ,when the patient tries to evaluate infertility and  pelvic pain in one another reason.The only definitive way to diagnose endometriosis is by laparoscopy.Laparoscopy is a minor surgical procedure in which a laparoscope, a thin tube with a camera at the end, is inserted into the abdomen through a small incision. Laparoscopy helps to determine the location, extent and size of the endometrial growths.

Treatment options available to women with endometriosis are:

Some complementary therapies may be beneficial in controlling the symptoms of endometriosis.These include acupuncture,homeopathy,yoga etc.

The course of treatment depends on several factors.The approach will depend on how severe the disease is and when you expect to become pregnant.Endometriosis is a debilitating and challenging condition. Fortunately, there are treatments available which can alleviate the symptoms and condition.